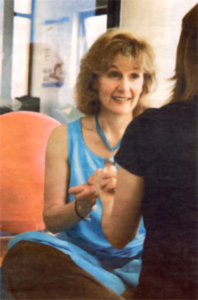 Lana Ackermann handles buried memories in another way. She literally taps into phobias, letting them out the closer she gets to the core of the problem. Wrapped in our bodies, in our skin, sinew and cells, we carry the marks that make us. Every scratch, bite, break, bruise and pimple is logged somewhere. Photo by T.J. Lemon

Lana Ackermann handles buried memories in another way. She literally taps into phobias, letting them out the closer she gets to the core of the problem.
Wrapped in our bodies, in our skin, sinew and cells, we carry the marks that make us. Every scratch, bite, break, bruise and pimple is logged somewhere.
To get to the root of a phobia, Lana raps her clients over the knuckles, sometimes taps them on the face and teaches them about karate chops.
“Emotional Freedom Techniques, or EFT, is a form of psychological acupuncture that uses the ancient Chinese meridian system to relieve psychological stress and physiological aches.
“Tapping on different points on the body, energy points that relate to an organ will unblock emotions. According to ancient eastern philosophy, emotions are stored in the various organs.
“Lungs store grief, the liver stores anger and kidneys fear.
“One of my clients had an immense phobia of flying, so I taught her to tap on certain points on her face and to repeat reassuring words to herself when she felt the fear coming on. This helps to release old cellular memories and underlying beliefs associated with the phobia,”
explains Ackermann.
We are addicted to emotion because it keeps us buzzing, so it becomes hard to drop the burden, but once the choice has been made, the body has the amazing ability to heal and create new memories, positive ones.
Ackermann says that cells are replicating all the time.
“Every 24 hours we have a new stomach lining. Cells pass memories onto the new cells, that’s how we evolve, and the EFT technique helps to get to the space between the cells, tapping into the old cellular memory so that the new cells can be healthy.”
Jack (not his real name), a 38-year old IT consultant, has suffered from anxiety his whole life. “I remember myself as a four year old experiencing feelings of tremendous anxiety and a tightness in my chest.
My parents took me to various doctors and specialists, I was even diagnosed with hyperactivity. From the age of sixteen I was seeing a psychologist regularly and from then on I sought out to find a cure for myself.
“In September I decided to try Body Talk. I found Lana Ackermann through a website and went to see her. She refused to do Body Talk on me and asked me to humour her and try EFT. I was sceptical and resistant, but I tried. It worked. At first it was strange not to feel anxious, it was like losing an old friend. I thought, better to feel bad than feel good and then fall into it again. But I didn’t fall.”

Jack explains that he felt different, not in a big bang kind of way, but subtly.
Changing perception of body image is then also possible. It has to do with programming. Tricking the brain to think a certain way about the body with the result that the body will play along. A simple thought indeed. A simple way of breaking the habit, of breaking the memory.